Brief Introduction: Untargeted metabolomics studies for biomarker discovery often have hundreds to thousands of human samples. Data acquisition of large-scale samples has to be divided into several batches and may span from months to as long as several years. The signal intensity drift of metabolites during data acquisition (intra- and inter-batch) is unavoidable and is a major confounding factor for large-scale metabolomics studies. Therefore, the combination of multiple batches in large-scale metabolomics studies requires proper data normalization to reduce unwanted variations prior to statistical analyses. Here, we developed a machine learning algorithm-based method, support vector regression (SVR), for large-scale metabolomics data normalization and integration. The unwanted intra- and inter-batch variations can be effectively removed after SVR normalization. We demonstrated that the portion of metabolic peaks with RSDs less than 30% increased to more than 90% of the total peaks after SVR normalization, which is much better than other common normalization methods. The reduction of unwanted analytical variations helps improve the performance of multivariate statistical analyses, both unsupervised and supervised, in terms of classification and prediction accuracy so that subtle metabolic changes in epidemiological studies can be detected. An R package named MetNormalizer was developed and provided for data processing using SVR normalization. 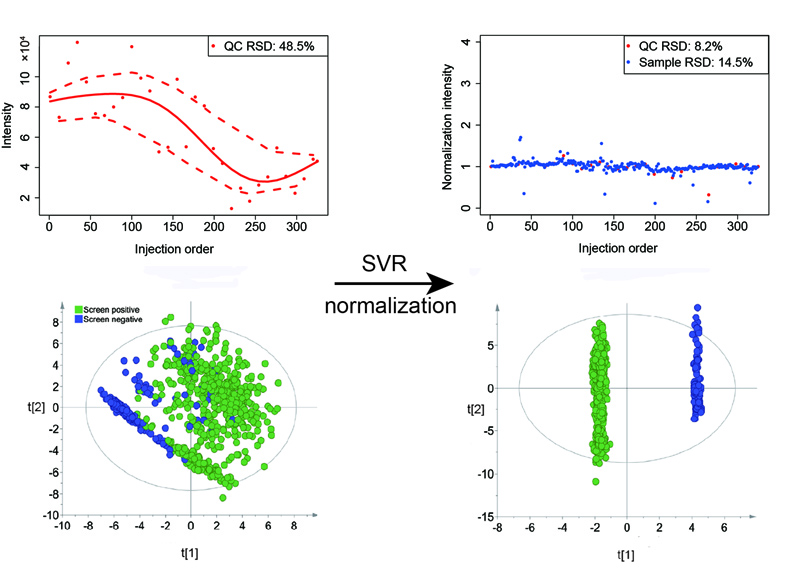 This work has been selected as ORAL presentation on 64thASMS conference on Mass Spectrometry (June 4-9, 2016 at San Antonio, TX, United States).

The newest version of MetNormalizer can be installed using github(http://github.com/jaspershen/MetNormalizer).